Matthew Grose, born in 1788, is the Adventurous Ancestor who left the mines of Cornwall and Somerset in England.

Around 1828 he was seeking new opportunities in the mines of Foxdale in the Isle of Man.

Moving with his wife, children, other family members, friends and mining / engineering colleagues from Cornwall  – they all headed across the breezy Irish Sea.

Upon arrival in the Isle of Man, his community-minded wife, Mrs Mary Grose (nee Wearn), would have noticed the hustle and bustle in the town of Douglas.

“Women often with round hats, like the Welsh, and girls without shoes and stockings, though otherwise not ill dressed..”

Bringing mining expertise to the island

Matthew Grose came from a renowned family of mining captains and engineers. Like other Cornishmen migrating to the Isle of Man, he brought with him specialised skills and direct experience of new technologies that were revolutionising mining at that time.

1788 Matthew Grose is baptised at the parish church of St Andrew, Loxton, Somerset. His father, Matthew Grose and uncle, Samuel Grose are likely in Loxton with other Cornish miners on an expedition to explore the green veins that have been found in the caves there. Unfortunately these contain no copper and the venture is abandoned.

1789 (likely earlier) – 1800 His father, Matthew and uncle, Samuel are mine captains at the Dodington copper mines.

1801 Dodington copper mine in Somerset closes when unable to raise capital to buy a steam pumping engine.

1810 His uncle, Samuel Grose snr and cousin, Samuel Grose jnr, puts their names to a ‘protest of miners’ at Wheal Alfred in the Royal Cornwall Gazette. They are distancing themselves from political reformist, Edward Budd who was establishing a new newspaper (the West Briton or Miners Journal). A ‘Matthew Grose’ signs the petition too – likely him (or father).

1817 Dodington Copper mines in Somerset reopen when a steam pumping engine is installed.

1824 His father, Matthew Grose, is buried in Dodington, Somerset

1839 His wife Mary Wearn passes away at Foxdale Mines, Isle of Man. Her obituary in the West Briton newspaper, Jan 25, 1839 reads

“On Tuesday, the 8th instant, at Foxdale Mines, Isle of Man, Mary, the beloved wife of Captain Matthew Grose, aged 49 years, deeply regretted by all her family and friends. Her charities and benevolence had endeared her to all classes, and in her the poor of the surrounding district have lost a kind benefactor and adviser.“

1841 He appears on the 1841 census at Foxdale Mines, Isle of Man as a Mine Agent along with his children Matthew (miner), Thomas (engineer), John (engineer), Mary, Eliza, Edward, Lavinia and Samuel.

1841 His mother, Jane/Jennifer passes away in Goldsithney, Perranuthnoe, Cornwall. Her obituary in the West Briton newspaper reads

“At Goldsithney, in Perranuthnoe, on the 23rd instant, at the house of her son, Capt. John Grose, Mrs. Jane Grose, aged 80 years, relict of the late Capt. Matthew Grose, formerly of Gwinear, and of Dodington in Somerset, much regretted and respected by her numerous family and friends. Her end was peace.” 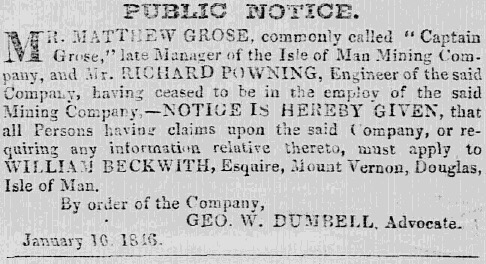 He is buried at Marown, Isle of Man