Still at the Parish Church of Saint Gwinear in Cornwall, we have another interesting grave/memorial to look at. 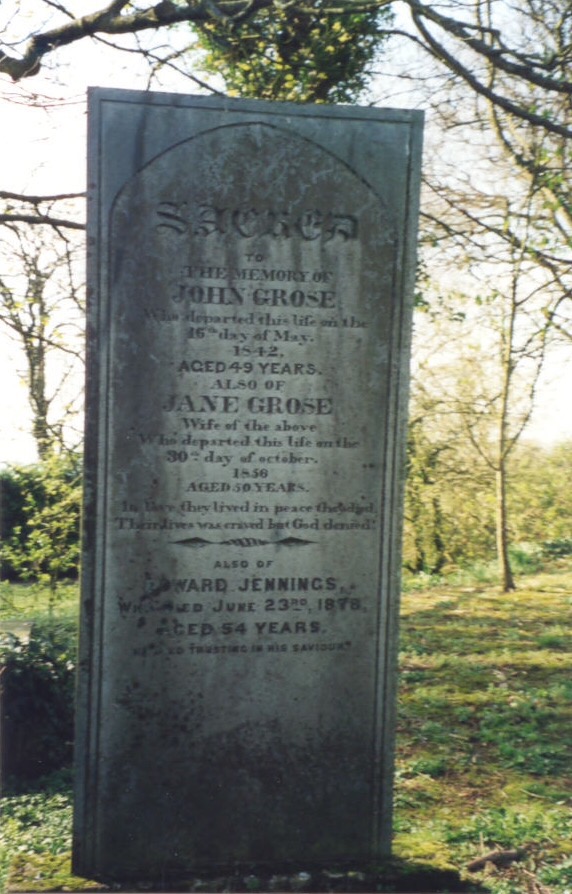 Who departed this life on the

Wife of the above

Who departed this life on the

In love they lived, in peace they died

Their lives was craved but God denied.
…

He died trusting in his saviour.
…

What do we know about John Grose?

John Grose is the son of Captain Matthew Grose (1761-1824) whose Memorial is also at Gwinear and details covered in this other post.

According to the 1841 census (below) and also his 1842 Will, John Grose was a grocer and draper in Goldsithney, Perranuthnoe, Cornwall.

We don’t have a baptism record for John Grose yet, but from his grave we can estimate his birth around 1793.

This fits with the Cornwall Memorial Inscription record on FindMyPast.

Although we have this Memorial Inscription and death record, we don’t yet have a burial record in Gwinear. Is this headstone indicating a burial place, or memorial for John Grose?

Another question: He is titled as Captain John Grose on his mother’s obituary.

“At Goldsithney, in Perranuthnoe, on the 23rd instant, at the house of her son, Capt. John Grose, Mrs. Jane Grose, aged 80 years, relict of the late Capt. Matthew Grose, formerly of Gwinear, and of Dodington in Somerset, much regretted and respected by her numerous family and friends. Her end was peace.”

Was he a retired ‘Mine Captain’, or another type of ‘Captain’?

His Will (transcription ongoing) looks like a an excellent resource of information as mentions some provision for his four living siblings:

“the children of my brother Captain Matthew Grose as shall be then living.”…

What do we know about Jane Grose?

According to the marriage record of John Grose and Jane Jennings on 26th January, 1840 from the Cornwall OPC Database, Jane Grose (nee Jennings) is from Gwinear and daughter of Thomas Jennings, a farmer.

We don’t see a baptism in Gwinear for a Jane Jennings, but we have a record for Jennifer Jennings to parents ‘Thomas and Anne Jennings’ which looks like the best match for her.

From Cornwall OPC database we have a burial record for Jane Grose in 1856 in Gwinear which corresponds with the grave.

What do we know about Edward Jennings?

The details of his death match closely with those on the Cornwall OPC Database:

So once again a few questions answered & as usual a few more things to find out! Please comment or contact if any errors, or have advice or info.

The next post will look at a third interesting gravestone at St Gwinear, Cornwall. Then we’ll go back over to the Isle of Man!