With generations of mining in his veins, Matthew John Grose inherited the enterprising spirit of his forefathers and lead an intrepid life through the economic turbulence of the nineteenth century.

Mining prospects had brought his grandfather (Matthew Grose senior, 1788-1849) and family from Cornwall to the Isle of Man in 1828. However the decline of the Manx mining industry meant that Matthew John Grose and many others would now have to venture even further overseas to make a living.

Matthew John Grose was born on the Isle of Man and baptised at Kirk German on New Years Eve, 31st December 1843.

At the age of seven, Matthew John Grose appeared on the 1851 census. He lived at Ballagawne, Rushen, Isle of Man, with his parents (father, Matthew, an “Agent of Mines” and mother, Anne) and three of his siblings – Emma (age 5), Walter (age 3) and Frederick (age 1).

There was also a female servant, Mary Bawden.

His older brother, Alfred Matthew Grose, does not appear in this household, but is with his maternal grandparents, John and Anne Read at Glen Maye.

At the age of seventeen, Matthew John Grose appeared on the 1861 census living at Ballacorkish, Rushen. His father, Matthew was listed as “Lead & Copper Mine Agent”. His mother, Annie, an “Agents wife”.

There was also a female servant, Mary Gallagher.

At the age of twenty three, Matthew John Grose gave his profession as “Mine Agent” when he married nineteen year old, Louisa Adie, on 21st September 1867 at Braddan, Isle of Man.

His bride, Louisa Adie (1848-1931), was born in Rushen, Isle of Man. She was the daughter of the late James Shaw Adie (1816-1865), Agent of Kentraugh, who originally hailed from Dunipace, Stirlingshire, Scotland. Louisa’s mother was Sarah Turner (1807-1894), from Stourbridge, Worcestershire, England.

Less than three weeks later, the newlyweds Matthew John and Louisa Grose had their son, Matthew Herbert Adie Grose, who was born on 12th October 1867 in Braddan, Isle of Man. Unusually, a baptism record has not been found (Please contact if you find this!).

Later that year, in September 1868, Matthew John Grose and his older brother, Afred Matthew Grose were trouble and committed for trial for stealing apples and peaches.

Soon afterwards, in October 1868, Matthew John Grose and his brother, Alfred Matthew Grose, appeared in a crowded court charged with stealing the fruit.

Both were sentenced to two months hard labour for grand larceny (theft).

“Because of the failure of mines on the Isle of Man, the 1870s proved to be the most dynamic period for Manx immigration to Nevada.”

Matthew John Grose does not appear on the Isle of Man census in 1871. There is a strong probability that he was silver mining in Lincoln County, Nevada in the United States of America with his brother, Alfred Matthew Grose.

Records have not yet been found for the Grose brothers in Nevada in the 1870’s, but there are clues on later entries on the USA census.

Given where they were naturalised, it is possible that Matthew John and Alfred Matthew Grose were both silver miners around Pioche in Lincoln County, Nevada 1872-1874.

“Located about one hundred and seventy-five miles north of Las Vegas near the Utah border, it is one of the Silver State’s more remote communities.

The discovery of silver ore in the vicinity in 1869 attracted the usual mining camp rush for the next three years.

The regional press called it one of the richest, wildest, and most promising camps in the West.

Pioche became the county seat in 1871 when the mining bonanza was approaching its apex.

In the extravagance of the period, it built a courthouse, paid its contractors and county officers lavishly, and found itself deeply in debt when the boom ended.”

“By the early 1870s, it had grown to become one of the most important silver-mining towns in Nevada.”

With the principle mines shutting down in Lincoln County, Nevada in 1876, Matthew John Grose may have decided to return home to the Isle of Man.

“The fortunes of Pioche diminished in the 1880’s due to the shutdown of the principle mines in 1876.”

Matthew John Grose reappears on the Isle of Man in 1877.

He would have found mining still on the decline in the Isle of Man too, but tourism was on the increase in Douglas and beyond.

“…the opening of the steam railway lines from 1873 to 1879 enabled resorts outside of Douglas to flourish.”

In April 1877, Matthew John Grose applies to the Licensing Court to sell intoxicating liquor at the Derby Hotel in Douglas. He did this via the transfer of a licence from Robert Pascoe, who had acquired it from a Mrs Gold, a widow whose husband (John Gold) had been shot dead in the bar in 1870!

By July 1877, Matthew John Grose appears on a list of people holding Public House licences and his premises is listed as the ‘Derby Arms’ at 10 Castle Street, Douglas, Isle of Man.

The following year, it appears in the newspapers that Matthew John and Louisa Grose were the victims of a robbery at their premises in May 1877. The culprit was George Dakin who stole a woollen plaid shawl, a shooting coat and a boys Ulster jacket.

His second son, Percy Heywood Grose was born at the Derby Hotel, Castle Street in 1877 and baptised at Braddan on 20th September, 1877. Matthew John Grose’s occupation is given as ‘Hotel Keeper’.

However, a year later Matthew John Grose had decided to return to mining in America and the lease of the Derby Hotel was put up for sale. Coincidentally, his wife, Louisa, was now pregnant with their third son.

His third son, Eden Hildesley Grose was born in Douglas, Isle of Man on 10th January 1879.

In 1879, Matthew John Grose donated a bottle of wine as a prize in the Douglas Annual Rifle Competition.

Eden Hildesley Grose was later baptised on 4th April 1880 at St John’s the Baptist in the Parish of German. His father’s occupation is given as Mining Overseer, suggesting that Matthew John Grose is now mining again.

Back to the USA:

By June 1880, Matthew John Grose is listed on the census as a silver ore miner at Adams Hill and Albion at Eureka, Nevada, USA.

“In the 1880’s, water began to creep into some of the mines and ore supplies began to run out.”

In 1881, his wife Louisa is on the Isle of Man census as a Tobacconist at 61, Athol Street, Douglas.

By 1882, Matthew John Grose appears on the California Voters Register as a resident in Mono, California, USA.

In 1886 he is still a resident in Mono, California.

In 1892, his eldest son, Matthew Herbert Adie Grose married Elizabeth Jane Lawson in the Parish of Lonan, Isle of Man and gave his emigrant father’s occupation as a ‘Prospector of Mines’.

Courtesy of iMuseum via FamilySearch

In 1900, Matthew John Grose is a resident in Pine Grove Precinct, Esmeralda, Nevada. He lives alone in a house that he owns (no mortgage) and his occupation is Miner of gold ores.

“After the demonetization of silver in 1893, the Pine Grove mines were only worked intermittently.” 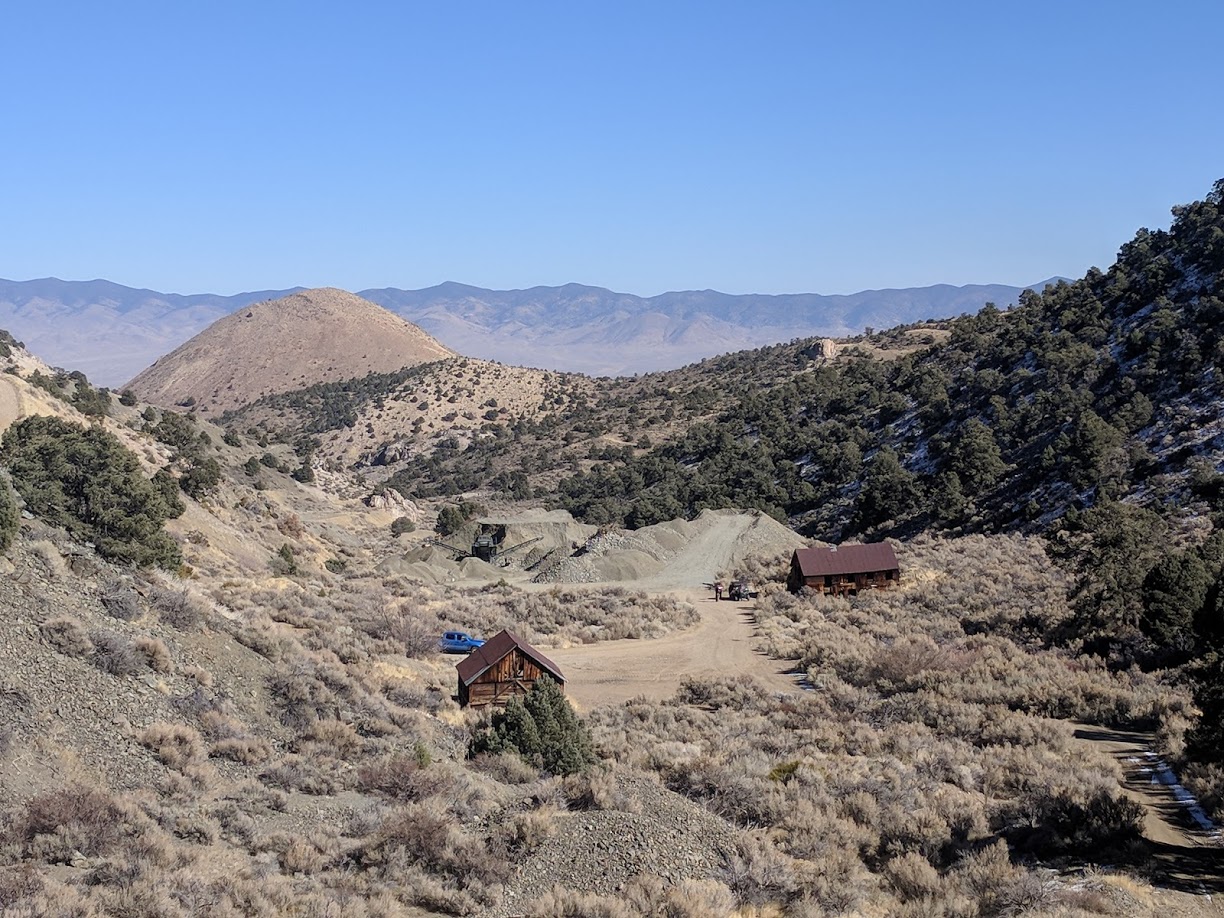 In the goods of Matthew John Grose formerly of
16 Castle Street in the Borough of Douglas &
late of Goldfield Nevada in the United States
of America miner deceased Know all men by these presents that we Louisa
Grose of No 28 Farrant St in the Borough of Douglas
widow, William Thomson of Atholl St in the said
Borough auctioneer and Eden Hildesley Grose of
28 Farrant St in said Borough tramcar driver are
jointly and severally & any two of us jointly
bound unto our Soveriegn Lord the King in the
sum of 5 pounds to the payment whereof well &
truly to be made to our Sovereign Lord The King
his heirs & successors & any two of us jointly,
our Executors & Administrators firmly by these
presents. As witness our subscriptions the twenty-fourth
day of March in the Year of our Lord one thousand
nine hundred and six.

He never returned home from the USA and many of his descendants remain on the Isle of Man. No burial record or grave marker has been found in Nevada for Matthew John Grose 1843 – 1905.

His last known residence was Pine Grove Precinct in 1900, which is over 200 miles from where he died in Goldfield, Nevada USA.