This post will look at the ancient parish church of St Runius in Marown, Isle of Man… and an interesting grave marker for members of the Grose family in the churchyard there.

In the previous post we looked for the graves of the Mining Engineer, Matthew Grose junior (1819-1887) & his second wife, Elizabeth nee Qualtrough (1835-1918), both buried at Kirk Christ, Rushen, Isle of Man.

Sketch of 1834. Old Kirk Marown with seats for 250. Courtesy of A Manx Note Book

The Old Church has been written about by many people, in the past and present day… with various versions of how it got it’s name:

St. Runius, also known as Old Kirk Marown, is a very quaint old church which still has candles for lights instead of electricity.

It is known as Old Kirk Marown because a new church was built in its place in 1853 on the main Douglas to Peel road.

St. Runius is a simple structure dating from the 12th century with alterations and extensions from 1750 to 1755 and in the late 1790’s.

It is called St. Runius as it is dedicated to St. Ronan of Lismore in Ireland and Marown also takes its name from this Saint “Ma-Ronan”, Marown.

The original building was from approximately 1200 AD and was enlarged in 1754 AD.

The old church was replaced around 1860, when a new church was opened. Old St Runius continued to be used occasionally for special services.

According to a note by the late Professor Sir John Rhys, in “Mannin” (No. 2) :” the Parish Church of Marown, spelled variously Marown, Maronne, and Maroon. Skeeley Maroon is dedicated to a Saint called Maronog, in the Irish Calendar; and in the Scottish Calendar, Ronan.”

In the Manx Doomsday Book, or Manorial Rent Roll, of 1511, A.D. , the parish is styled St. Runii—St. Runy was evidently one of the Columban missionaries who came to the Isle of Man probably about the 7th Century, and it is in the Old Churchyard of Marown where his remains, with those of St. Lomanus and St. Onca are supposed to be buried, ” and these for ever lie un-molested.”

From A Manx Note Book

Why was a new church built?

With the improvement of the Douglas/Peel main road in the early 19th Century population growth focused on Crosby and the old church became too small and too far from the congregation.

In 1844 Phillip Killey, owner of a brewery in Douglas, gave land from his estate adjoining the main road between Crosby and Glen Vine for a new Church.

Tynwald approved the scheme in 1847, the foundation stone was laid by Bishop Auckland in 1849 and the Church consecrated in 1859.

From A Manx Note Book

Many years later on the 5th Oct., 1924, A.E. CLARKE wrote about this event at Marown Vicarage…

Needless to say that , this gift was accepted. and in a few years time from this date, the Old Church, so far as public worship was concerned, was forsaken for the new.

It was not so, however, with regard to burials.

The people of Marown still clung tenaciously to the old ground, where the remains of their forefathers lay for generations. 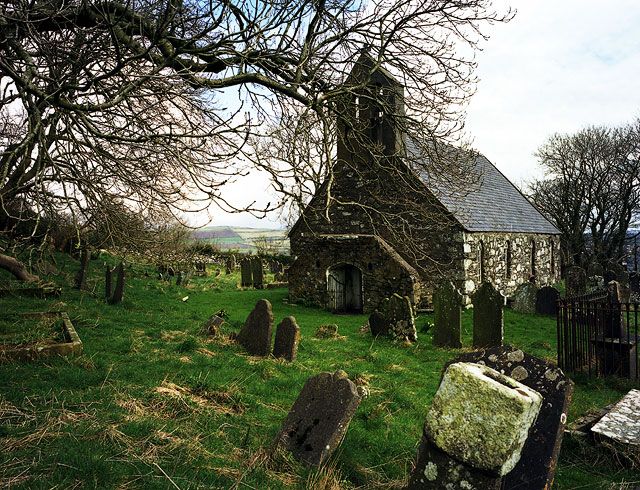 In the churchyard of St Runius, Marown, Isle of Man there is a granite obelisk and two fallen headstones surrounded by railings. The granite is possibly from ‘the fine granite quarry’ that the Grose family opened at Foxdale. 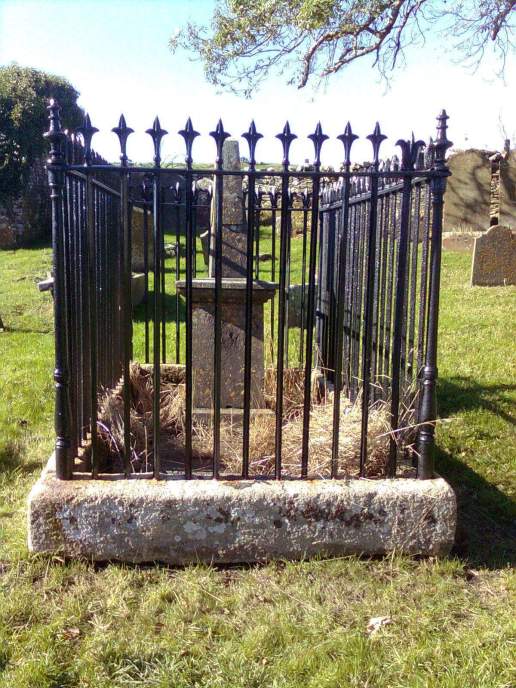 …
Over the years there have been discussions (and confusion!) about the individuals buried there.
By studying a combination of hard-to-read memorial inscriptions and incomplete burial records, this is our best interpretation of the burials. If any further information comes to light, then it will be corrected and shared on the blog. 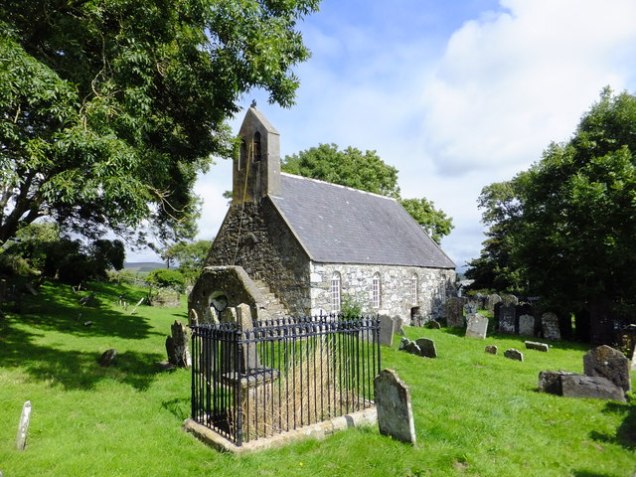 Who is buried there?

The Grose family used St Runius as their main local church for baptising, marrying and burying for many years. There was a track from their home at Cornelly/Jones Mine (part of Foxdale Mines) to the church. Other churches were used too (eg, Patrick), but there is a lot of activity at St Runius.

It is likely that three generations of the Grose family are buried at St Runius, Marown… Matthew Grose senior (1788-1849) with both of his wives, his daughter-in-law and perhaps five of his grandchildren.
The first ‘Grose’ burial was likely Matthew Grose senior’s first wife, Mary Grose (nee Wearn) buried 1839. She doesn’t appear in the burial records, but the inscription on the headstone (see section below) and newspaper obituary indicates this.

…
An infant, John Grose, was buried in Marown in 1845. This is likely, John Matthew Grose the son of John Grose and Charlotte (nee Clucas).

…
Matthew Grose senior was buried in 1849

Comparatively few of the gravestones in Marown are used to point the moral of the shortness of life at its longest and the possible suddenness of death.
Captain Matthew Grose [junior] of the Ballacorkish mine, Rushen, erected a monument to his son [Frederick] in the form of an obelisk, bearing on its four sides the words,

There are inscriptions on the fallen stones and obelisk.

Thanks to Rob Cannell for cleaning the headstone, so the ‘Ann’ above could be corrected to ‘Mary’ which corresponds to Mary Grose (nee Wearn).
…

Confusion reigned for a long time because there was an 1839 obituary for a Mary Grose, but it seemed her burial was recorded in 1864. Turns out they were both right – they’re two different people! Both wives of Matthew Grose senior and both called Mary!

Add to the mix a memorial inscription from 1839 transcribed as Ann Grose instead of Mary Grose! Then it turns out that there are actually two Mary Groses… and an Anne Grose buried there too! Anne being a wife of a Captain Matthew Grose too… no not that one – his son!

We got there in the end (hopefully!). It’s a reminder to check as many sources as possible and see the originals, not transcriptions where possible.

Originally erected by the mining engineer, Matthew Grose junior, mourning his young son Frederick, the granite obelisk is a fine monument to the generations of the Grose family buried at St Runius, Marown and elsewhere on the Isle of Man.

Matthew Grose junior may now be in an unmarked grave at Rushen, but the monument he created for others in his family has stood for almost 160 years.

Thanks and Further Reading:

I must thank Rob Cannell for providing plenty of information and some of the great photos for this post. Also for cleaning up that headstone!

2 thoughts on “Life, how uncertain! Death, how sure!”